TenneT transfers approximately 7.77 terawatt hours of wind energy from the North Sea to the shore in the first half of 2017

In the first half of 2017, the wind energy transferred by the transmission system operator TenneT from the North Sea to the shore rose to 7.77 terawatt hours (TWh)*).

Lex Hartman, Member of the TenneT Management Board, said: “The flow of energy from the North Sea has now reached a significant 16.5% share of overall wind energy generation in Germany and thus represents almost a sixth of the total wind power output. At the same time, future costs will decrease for wind farms and connection systems, which points to excellent economic performance in the field of offshore energy. We are also expecting this trend to continue as time progresses.”

“Offshore wind farm capacities in the North Sea totalled almost 3,000 megawatts in the first half of 2016, which rose to almost 4,400 megawatts by the end of June 2017. This expansion, on the one hand, lays clear the present growth in generation output, but a major prerequisite for the successful bringing in of the ‘wind harvest’ was the continual expansion of TenneT transmission capacities, since February 2016 we have already been able to supply more than 5,200 megawatts. As such, TenneT has now achieved more than 80% of the federal government’s expansion goal of having 6,500 megawatts of offshore wind capacities by 2020,” said Hartmann.

*) Financially subsidised electricity in accordance with the German Renewable Energy Act, without other direct marketing; for 2017, as the provisional actual value. 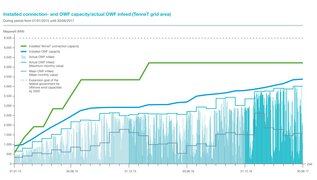 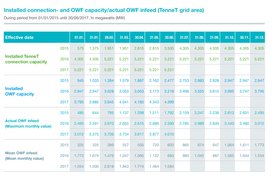 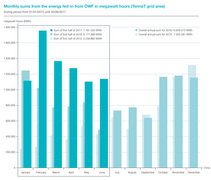 Media information: The tables and graphics are available in a higher resolution from the TenneT press office: presse(at)tennet.eu