Today TenneT and its Danish partner Energinet.dk drove the first pile into the ground for the construction of the Dutch convertor station of the COBRAcable, a subsea electricity connection that will link the Dutch and Danish grids. Nienke Homan, a member of the Groningen Provincial Executive, Marijke van Beek, mayor of Eemsmond, and TenneT COO Ben Voorhorst together performed the opening ceremony by starting the first pile-driving procedure. The ceremony was also attended by representatives of Siemens, which is responsible for the project’s electrical installations.

Minister Henk Kamp of Economic Affairs commented: 'The Cabinet is committed to reducing the demand for energy by implementing energy conservation measures and promoting the renewable generation of electricity and heat. The new high-voltage interconnector between the Netherlands and Denmark is important to achieving the Netherlands’ energy objectives. This subsea cable link will increase the security of supply and will provide additional capacity for transporting renewably generated wind energy between the two countries.'

'The COBRAcable will play a key role in realizing a truly sustainable international energy landscape,' says TenneT COO Ben Voorhorst. 'Via this cable, the Netherlands and Denmark will be able to exchange electricity in a convenient, safe and environmentally friendly manner. For instance, the Netherlands will be able to important more renewable wind energy from Denmark. During periods of little wind, the cable will increase the security of electricity supplies in Denmark. The interconnector will also be designed in such a way as to enable the connection of an offshore wind farm at a later stage.'

The COBRAcable will have a capacity of 700 MW, will be approx. 325 kilometres long, and will run from Eemshaven (the Netherlands) to Endrup (Denmark) via the German sector of the North Sea. The connection will be constructed as a High-Voltage Direct Current (HVDC) cable, since the use of DC technology minimizes transmission losses over long distances and therefore virtually eliminates any loss of renewable electricity. Two onshore converter stations – one in the Netherlands and one in Denmark – are needed to connect the cable to the existing grids.

These stations will convert the electricity from direct to alternating current or vice versa (depending on the transmission direction), and will feed it into the Dutch or Danish onshore transmission grid in order to supply electricity to homes and businesses.

Siemens is responsible for constructing the electrical installations in the converter stations in the Netherlands and Denmark. The company will also undertake the civil engineering of the converter station in the Netherlands. ‘We are looking forward to helping to construct this innovative European electricity connection together with TenneT, Energinet.dk and Prysmian,’ said Bernard Fortuyn, a member of the Managing Board of Siemens Netherlands. ‘Siemens is currently working on no less than five of these “electricity highways” in Europe. If we include the COBRAcable, we will help bring 4.6 gigawatts of capacity online in the coming years. In this way Siemens is making a significant contribution to integrating the different national electricity systems into a single European grid.’

The COBRAcable is not the first subsea electricity connection constructed by TenneT. In 2008 the TSO completed the NorNed cable between the Netherlands and Norway (capacity: 700 MW, length: 580 km). This was followed in 2011 by the BritNed cable between the Netherlands and the UK (capacity: 1,000 MW, length: 260 km). In addition to the new COBRAcable, TenneT is currently also working on the NordLink project, a 1,400 MW subsea cable link between Germany and Norway that is expected to be completed in 2020.

The COBRAcable is a cross-border project of European significance. The European Commission has therefore allocated a subsidy to this project under the EU Economic Recovery Plan, and has designated the COBRAcable as a Project of Common Interest (PCI). This preferential status is assigned to energy infrastructure projects that meet a number of specific criteria. 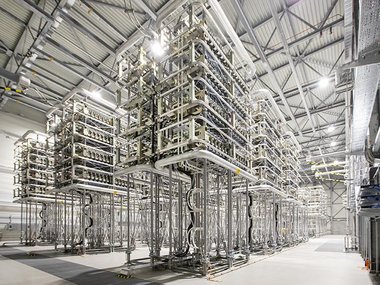 Green electricity flows between the Netherlands and Denmark

As of delivery day 7 September, the so-called 'green cable' between the Netherlands and Denmark will be available for the electricity market. The... 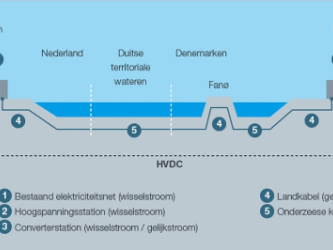 TenneT and Energinet.dk to install data cable alongside COBRAcable

TenneT and its Danish counterpart Energinet.dk will start constructing the so-called COBRAcable towards the end of this year. The COBRAcable is a new...