Today TenneT marked the official opening of a special cable storage facility in Eemshaven, the Netherlands. The facility provides 2.309 m² of floor space, enabling the storage of up to 4,600 tonnes of high-voltage electricity cables. The cables concerned measure between 10 and 24 cm in diameter, with weights ranging from 30 to 100 kg per metre. TenneT needs these massive cables for subsea connections that link offshore wind farms (OWFs) to the onshore grid, and for offshore direct-current interconnectors (DCI) like the NorNed cable between the Netherlands and Norway and the planned COBRAcable between the Netherlands and Denmark.

The storage facility includes two huge ‘turntables’ that are used to roll up the cables. Each turntable is divided into six sections, allowing storage of twelve different cable systems at any given time to a total of 2,300 tonnes. The facility’s location in Eemshaven is ideal for various reasons. Vessels can moor in front of the storage facility, facilitating quick and efficient loading and unloading of cables. The facility is also located near the converter station for the NorNed cable and the planned landing point of the COBRA cable. 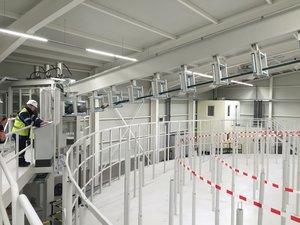 Previous plans for the construction of an Offshore Maintenance Centre (OMC) in the north of the Netherlands have been shelved for the time being. Such an OMC was initially envisaged as a base of operations for personnel involved in maintenance work on the transformer platforms and offshore grid connections for German and future Dutch OWFs north of the Wadden Sea. Since there are no current plans for new OWFs in this sector of the North Sea, an OMC in the north of the country is not necessary at this time. Maintenance personnel working on TenneT’s offshore projects currently do not need an onshore base of operations, because they will perform their work mainly on the offshore platforms or using those platforms as their base of operations. 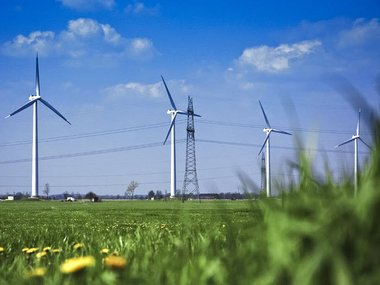