An important milestone for TenneT and a major contribution to the energy transition: TenneT has met and even significantly exceeded the German government’s roll-out targets for sustainable North Sea wind power. The transmission readiness of BorWin3, TenneT’s twelfth offshore grid connection project, means that a further 900 megawatts of transmission capacity will be available to feed the wind power produced at sea into the onshore extra-high voltage grid. In total, the offshore transmission capacity in the North Sea alone will therefore amount to 7.132 gigawatts this year. The federal government’s target for the North Sea and Baltic Sea is 6.5 gigawatts by 2020.

“Further efforts are needed to push ahead with the energy transition,” said TenneT Managing Director Tim Meyerjürgens. “According to all international studies and scenarios, the current  roll-out rate of offshore wind in Europe is not sufficient to achieve the goals of the Paris Climate Agreement for Europe. An accelerated, large-scale and internationally coordinated roll-out is necessary.”

In this context, TenneT has just presented a feasibility study by the North Sea Wind Power Hub Consortium on the implementation of wind power hubs in the North Sea. “A future internationally coordinated approach could implement the connection and integration of a roll-out of large-scale offshore wind energy more effectively and at considerably lower costs of up to 30 percent than with continued individual national planning,” says Meyerjürgens. Since the North Sea has a great potential for offshore wind energy, the implementation of 180 gigawatts of offshore wind by 2045 could be achieved through the consortium’s approach.

About BorWin3
BorWin3 is the third project to be implemented by TenneT off the coast of Borkum using direct current technology, alongside the grid connection projects BorWin1 and BorWin2. At the Emden/East site, TenneT has built a converter station with a substation to feed the energy generated at sea into the onshore extra-high voltage grid. In total, a distance of 160 kilometres has to be bridged: the wind power is first transported to Hamswehrum via a 130-kilometre-long subsea cable running west of Borkum and from there to Emden/East via a 30 kilometre-long underground cable.

About TenneT
TenneT is a leading European electricity transmission system operator (TSO) with its main activities in the Netherlands and Germany. With over 23,000 kilometres of high-voltage connections we ensure a secure supply of electricity to 41 million end-users. We employ approximately 4,500 people, have a turnover of EUR 4.2 billion and an asset value totalling EUR 22 billion. TenneT is one of Europe’s major investors in national and cross-border grid connections on land and at sea, bringing together the Northwest European energy markets and enabling the energy transition.  We make every effort to meet the needs of society by being responsible, engaged and connected.
Taking power further

Note for editors: If you are interested, we will be pleased to provide you with further photo material. 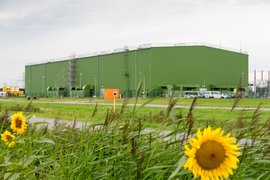 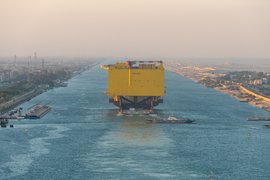 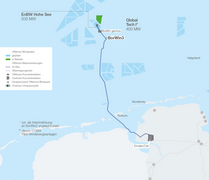