In the tendering process for the award of the contract to build the 235-kilometre-long offshore grid connection system BorWin6, TenneT has now also awarded the contract for cable pro-duction and laying. Nexans will be the contractor for the sea, tidal flat and land cables. This means that the important contracts for the construction of the BorWin6 grid connection have been awarded. TenneT had already commissioned the converter stations at sea and on land in February.

"We have a long and trusting partnership with Nexans, which guarantees us reliability and quality at the same time," said Tim Meyerjürgens, COO of TenneT. BorWin6 is the last grid connection project in the German North Sea to be realised by TenneT before the technologi-cal leap to two gigawatts and 525-kilovolt cables.

Various direct current cables with 320 kilovolts will be used in the project. Among other things, about 400 kilometres of cables with copper conductors, which have a diameter of up to about 14 centimetres, will be produced for laying at sea, including reserve cables. They weigh about 47 kilogrammes per metre. On land, cables with an aluminium conductor are also used, which weigh 16 kilograms per metre with a diameter of 12.5 centimetres. In sections of about 1,400 metres, these will then be connected to each other with sleeves. The laying work is scheduled to start in 2025.

Two cable strings will be laid for the grid connection, one positive and one negative pole, as well as an additional fibre optic cable, which will later be important for controlling the system.

The wind turbines are connected directly to the BorWin kappa offshore platform via innovative 66-kilovolt three-phase cables. This eliminates the need for the transformer stations that were previously required in each wind farm and the 155 kV three-phase cables that were previously used to connect to TenneT's offshore platform.

Facts and figures on BorWin6

BorWin6 will be realised with a capacity of 980 megawatts off the coast of Borkum. With 190 kilometres of submarine cable, it will be the longest submarine cable route to date. On land, the cable will be laid parallel to the existing routes of the HelWin1+2 and SylWin1 connec-tions, whose onshore converters are also located in Büttel. 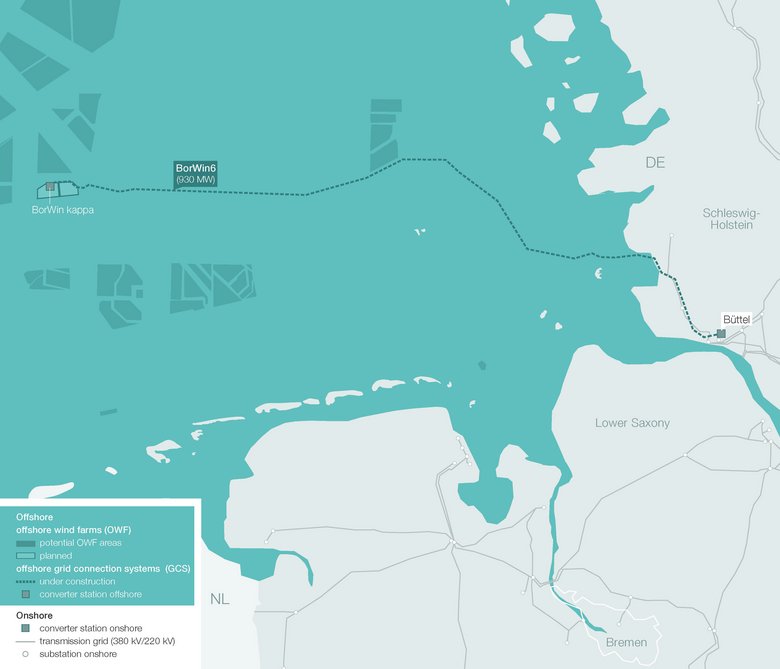