Today, the project partners TenneT, Statnett and KfW (represented by KfW IPEX-Bank) have carried out the ground-breaking ceremony for the construction of the German con-verter station for the NordLink subsea cable project and a symbolic cable pulling together with the Schleswig-Holstein Minister of Energy, Robert Habeck, the Norwegian ambassa-dor, Elisabeth Waalas, and the mayors of Wilster and Nortorf. Many representatives from federal, state and regional politics, business and public life attended the ceremonial event.

“NordLink connects two perfectly complementary systems for the exchange of renewable energy: German wind and solar power, on the one side, and Norwegian hydropower, on the other,” said Lex Hartman, member of the TenneT executive board. “Projects like NordLink make an integrated European energy market possible. To ensure that energy is directed to where it is needed. Easily, safely, and eco-efficiently,” Hartman stated.

“NordLink is an important building block for the future of the energy transition. It enables the generation of what we used to call base load power,” said Robert Habeck, Deputy Minister-President of Schleswig-Holstein and Minister of Energy, Agriculture, the Envi-ronment and Rural Areas. “The ‘green link’ establishes a connection to the hydropower plant capacities in Norway and will be able to counteract congestions in the German transmission grid,” Habeck added.

NordLink has a capacity of 1,400 megawatts (MW). This places its capacity considerably above that of a large conventional power station.

“The interconnector increases the possibilities for exchange of renewable energy, contributes to the reduction of carbon emissions and achievement of climate goals and increases the security of supply in both countries”, stated Gisela von Krosigk, Managing Director at KfW IPEX-Bank.

German consumers will benefit from the positive effect on power prices resulting from the import of low-priced hydropower when the demand is high. A considerable part of the socio-economic advantages of NordLink results from the profits generated by trading transmission capacity via the interconnector. These profits will be used to fund other network projects or lower energy rates.

Håkon Borgen, Executive Vice President at Statnett, said: “When there is a surplus of hydropower in Norway, we can export this to Germany and create value. When there is a demand for more power, especially during dry and cold seasons, Norwegian consumers will profit because we can import German wind and solar power for a reasonable price.”

The integration of the project into the Federal Requirements Plan Act provided a statutory basis for the necessity and the urgency of implementing the project for the energy market. The awarding of “Project of Common Interest” status by the

European Union in accordance with the new guidelines for trans-European energy infra-structure underlines the high economic and energy industry importance of the project at a European level.

The Norwegian ambassador, Elisabeth Walaas, said: “This is a milestone in German-Norwegian energy relations. NordLink is taking the realisation of the energy transition and the integration of renewable energy to a whole new level.”

The ambassador was not the only Norwegian politician present at the construction site. Two mayors and two county commissioners from the Agder region – where the NordLink convertor will be located near Tonstad on the Norwegian side – had also travelled to Wil-ster on the occasion of the ground-breaking ceremony in order to attend this traditional German event. They also took advantage of the opportunity to exchange experiences with their colleagues from the Wilster region.

NordLink is the first interconnector to provide a direct link between the Norwegian and German energy markets. This connection promotes the integration of the north-west Eu-ropean energy market, increases market efficiency and contributes to a stabilisation of energy prices. When limited activity of wind turbines and solar cells result in higher energy prices in Germany than in Norway, energy generated by Norwegian hydropower plants can be imported via NordLink. The power line connects the capacities of Norwegian hydropower plants with those of wind and solar farms in Germany. The Norwegian water reservoirs essentially function as “energy reservoirs”: the water inside them is retained when energy is imported from Germany. In turn, they can come into play during peak consumption periods in Germany, and when there is little production from solar and wind power plants. Then Norwegian hydropower is transported to Germany.

The NordLink project will be realised by the Norwegian TSO Statnett and DC Nordseeka-bel GmbH & Co. KG, each with 50% ownership. TenneT TSO, and German promotional bank KfW both have shares of 50% in DC Nordseekabel. DC Nordseekabel is responsible for the construction of the German part of the project, including permits.

Due to the length of the route and the large transmission capacity, direct current is used for efficient transmission with low losses. Both cables (positive and negative poles) are connected to converter stations at each end.

Statnett is responsible for the development and operation of the Norwegian transmission grid, including interconnectors with several other European countries. Statnett employs around 1,200 people and operates 11,000 kilometres of high-voltage lines. In 2015, Stat-nett generated a turnover of 5.9 billion NOK.

TenneT is a leading European electricity transmission system operator (TSO) with its main activities in the Netherlands and Germany. With approximately 22,000 kilometres of high-voltage connections we ensure a secure supply of electricity to 41 million end-users. We employ approximately 3,000 people, have a turnover of EUR 3.3 billion and an asset value totalling EUR 15.4 billion. TenneT is one of Europe’s major investors in national and cross-border grid connections on land and at sea, bringing together the Northwest European energy markets and enabling the energy transition. We take every effort to meet the needs of society by being responsible, engaged and connected.
Taking power further

KfW is one of the world’s leading development banks. With its decades of experience, KfW is committed on behalf of federal and state governments to improving the economic, social and environmental conditions of people worldwide. In 2015 alone, it provided subsidies of €79.3 billion. Thirty-seven per cent of these subsidies were allocated to climate and environmental protection measures. In Germany the KfW Banking Group has offices in Frankfurt, Berlin, Bonn and Cologne. It is represented in 80 locations worldwide.

Photos of the symbolic cable pulling and the ground-breaking ceremony at the construc-tion site with a subtitle, diagrams of the route and technical structure can be downloaded in high resolution via this link. 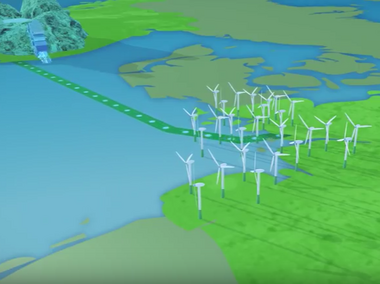 The European Investment Bank (EIB) will provide a EUR 350 million loan to TenneT Holding B.V. to finance “NordLink”, the first interconnection between...