Three-phase grid connection off the coast of Borkum

After alpha ventus, Riffgat is the second offshore grid connection that TenneT has connected to the transmission grid using three-phase current technology. The wind farm of the same name is located within the twelve nautical mile zone of Lower Saxony, about 15 kilometers northwest of the East Frisian island of Borkum and thus about 50 kilometers from the coast. Due to the proximity to the mainland and the installed total output of 113 megawatts (MW), it was technically and economically most efficient to realize Riffgat as an individual three-phase current connection.

The 80 kilometer 155 kilovolt connection (kV) will be connected to the 220 kV grid via the Emden/Borßum substation. The existing transformer station was extended accordingly. Since February 2014, power capacities of up to 113 megawatts (MW) have been fed into the German power grid via 50 kilometers of submarine and 30 kilometers of land cable. Laying the undersea cable off the coast of Borkum was technically extremely demanding, as the route led along a dumping area for World War II ammunition. For more than 18 months, 30 tons of ammunition had to be recovered and disposed of with the utmost care and effort before the grid connection could go into operation. 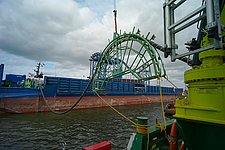 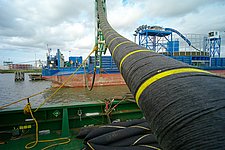 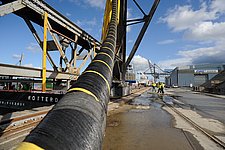 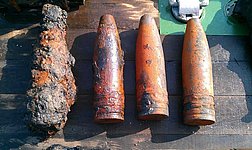 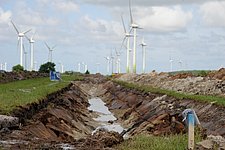 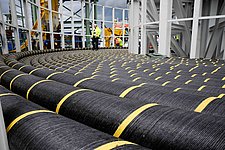 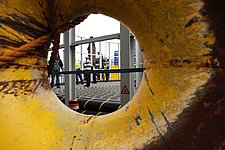