Grid connection with the world's most powerful offshore converter platform

Since 2016, three wind farms - Gode Wind 1, Gode Wind 2 and Nordsee One - have been connected to the transmission grid via the 135-kilometer DolWin2 direct current connection. In addition to 45 kilometres of submarine cable, TenneT also laid 90 kilometres of land cable, which run from the coast to the onshore converter station Dörpen West in Emsland. There, the direct current is converted back into three-phase current, fed into the transmission grid by the transformer station and redistributed to consumption-intensive regions. With a transmission capacity of 916 megawatts (MW), DolWin2 can supply more than one million households with clean wind energy per year.

DolWin beta, the heart of the DolWin2 grid connection, is currently the most powerful offshore converter platform in the world. For DolWin beta, TenneT opted for an innovative installation concept: the platform was anchored to the seabed by gravity alone. This design simplified the installation of the offshore converter platform, as it meant that no piles had to be driven into the seabed and no crane ship was required. To stabilize the platform, water was slowly pumped into the six steel legs during installation, causing it to sink to the seabed. Subsequently, the water in the steel legs was replaced by gravel and sand to fix the platform permanently. DolWin beta thus defies the harsh North Sea conditions and is always calm in the water even in strong waves. 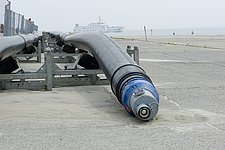 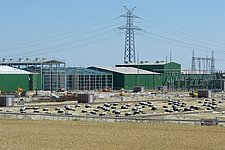 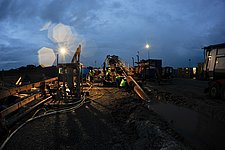 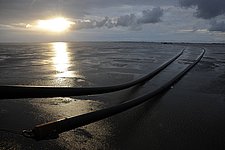 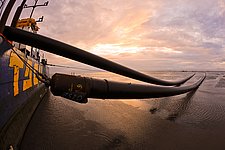 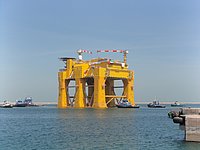 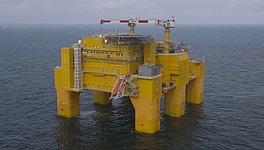